Since our daughter Jennifer Lynn left for Shanghai at the start of the fall semester for her year studying abroad, I have recounted some of her adventures – and her parents’ anxieties – in my blog. On Friday, we picked her up from the airport and it was an emotional reunion for me.

It’s been more than eight months since we’ve seen her and while we know that she has good common sense and isn’t someone who experiments with testing the boundaries, when I saw her come down the escalator at the baggage claim at the Oakland Airport and I ran over to give her a huge hug, I couldn’t help but shed some tears of relief… 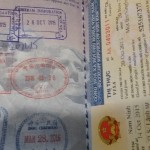 As someone who has never had a passport, hers is pretty cool.

Relief and gratitude that during her time away she never got lost and ended up in a dark alley in a bad part of Bangkok, that the German tourist in their $3 hostel in Kuala Lumpur was just strange and not a psychopath, that she stayed relatively healthy and never experienced a gastric emergency in spite of eating street food in six different southeast Asian countries, that she didn’t lose her passport, laptop, camera, phone or sense of humor, that she made friendships with classmates that she would otherwise have never gotten to know, and through it all, she managed to actually go to school and check off some graduation requirements.

From her perspective, she downplays it, saying that the anticipation of the unknown was much harder than dealing with the reality once she got there. In her words, she was a little overly dramatic in the way she was looking at the experience of living in China.

That said, she also talks about how the experience took her way out of her comfort zone. She had to be okay with much different standards of living, cleanliness and hygiene. Just the mention of a squatty potty makes me squirm but in that part of the world, get used to it.

Yet there are also ways that life isn’t all that different. On our last trip to Target before she left, she was feeling nostalgic about not having Oreos for a year. Come to find out, not only can one get Oreos in China; there are varieties in China that we wish we could find in California. The Tiramisu Thin Oreos that she brought back are amazing.

We all commented on how being able to talk regularly on We Chat or What’s App made the distance between us seem so much shorter. We thought Skype would be the primary way that we would connect but it was so much easier for her to find a private corner in the Jia than disturb her roommate with a Skype call. Because we don’t hear from him nearly as often, Jennifer’s brother who is in Kansas seems much farther away than she did when she was in China.

Now that she’s home for the summer, I have to remember that she probably doesn’t need my input to plan a trip to the Redwoods when she has made her own plane, bus, and train reservations in countries that don’t even use the same alphabet as we do.

Steve and I look forward to hearing her stories unfold, enjoying the hundreds of photos and appreciating the maturity that she gained. We love having our same…but different…daughter back home.