I had a chance to talk to “Petaluma’s Salute to American Graffiti” organizer John Furrer last week about the 50% chance of rain that was forecast for Saturday. That’s the day when 450 classic cars – many of which are convertibles and all of which are polished, waxed, and buffed to mirror-like perfection – were going to be arriving for the car show. He said he wasn’t worried. He had a direct line to the Big Man upstairs to make sure that rain didn’t spoil the day. 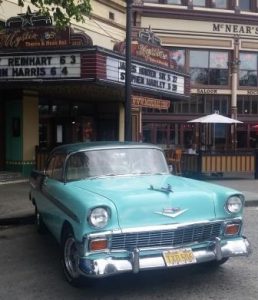 And I’ll be darned. Whatever John did worked. At 10:00am, the official start time for the event, it started to rain. And for about two minutes, it looked like the day was going to be washed out. But then it stopped. And never started again.

In fact the cool and overcast day was ideal weather for strolling among the cars and appreciating the love, expense and showmanship that goes into restoring them. In past years when it’s been sunny on the day of the event, the heat coming off the asphalt on the street, plus the sunlight reflecting off the polished chrome mixed with the high octane exhaust when the cars start crusin’ the Boulevard, can melt us spectators very quickly.

Hats off once again to John and Joetta Furrer, the founders of the Salute. In their characteristic humility, they are the first to say that the event has become such a success over the past 11 years because of the help and dedication of many, many other people.

Without a doubt, there is a great team of people who work tirelessly year-round to organize the 3-day event but my sense is that the Furrers are the linchpin of the organization. Even though John has stepped down as president of the non-profit Cruisin’ the Boulevard which produces the event, he’s the guy that embodies the authenticity and upbeat spirit that draws 30,000 people from all over the world into Petaluma.

“Petaluma’s Salute to American Graffiti” has a genuine vibe that people really respond to. It doesn’t feel like a fundraising effort with an overlay of an event. What “Salute” is about is celebrating Petaluma as Hometown USA and a love of the kind of the classic cars that are central to the American Graffiti coming of age story. 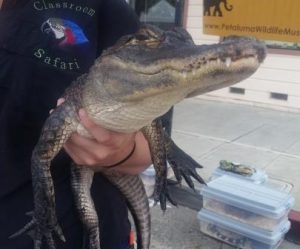 This happy guy was at the Classroom Safari booth on B Street. Isn’t he cute?!

But that’s not to say that “Salute” isn’t good for Petaluma. It is. Many non-profits have booths at the event to share information about their programs. And more importantly, the sponsoring organization has raised tens of thousands of dollars that are invested back into the community. This year four automated external defibrillators were donated to PEP Housing and numerous scholarships to high school seniors.

So a big thank you to everyone who was involved in organizing, producing and volunteering to make this years’s “Salute to American Graffiti” another triumph. You make Petaluma proud!